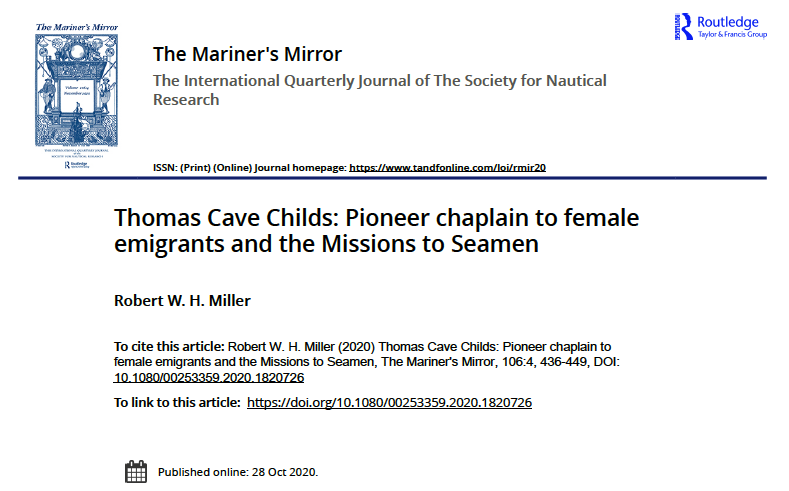 Fr. Robert Miller has published a new article on an important early figure in maritime ministry in The Mariner’s Mirror journal.

Miller, long a member of the Society for Nautical Research, has published several books on the work of the church and the merchant seafarer from the earliest Christian centuries until the nineteenth century. He is a Catholic priest of the Diocese of Clifton currently serving a Wiltshire parish.

Thomas Cave Childs (1819–67), a vicar in the worst part of Devonport, was a pioneer in the welfare of female emigrants and was involved in the foundation of the Missions to Seamen. Childs, the real link with the remnants of John Ashley’s missionary work with seafarers, was the catalyst which brought W. H. G. Kingston into the equation, leading ultimately to the formation of the Missions to Seamen. He was briefly one of its chaplains, based on the Solent, but a redistribution of the mission’s efforts, coupled with ill health, led to his departure from the organization. He died in tragic circumstances at the age of 46. His contribution to the welfare of female emigrants and to the Church of England’s work among seafarers generally has largely been forgotten, but deserves far greater recognition. This article looks at these aspects of his ministry.

You can purchase the article to read here.