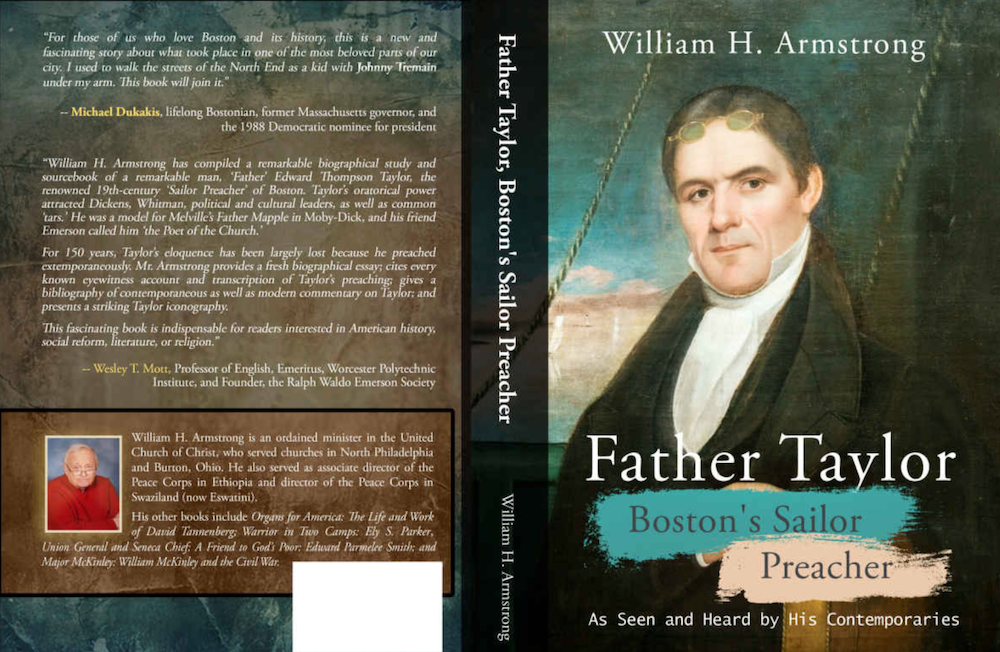 William Armstrong brings together this great collection of stories about the well-known 19th century seafarers’ minister in Boston, Rev. Edward Thompson Taylor. Armstrong is a retired minister of the United Church of Christ, having degrees from Union Theological Seminary and The Lutheran Theological Seminary. He has authored a number of books, particularly on 19th century American history.

A Methodist minister, Taylor was known as “Father” Taylor by seafarers and supporters. Taylor’s reputation was as a captivating orator, speaking extemporaneously in front of crowds. As Armstrong explains, “this Methodist preacher, greatly admired by the literary, religious, and civic leaders of his time, was virtually uneducated. He had spent his youth as a common seaman and learned to read only when he was an adult.” (xi) His experience as a sailor gave Taylor many down-to-earth stories to weave into his sermons as preacher for the Boston port’s seafarers.

The lack of education is perhaps why Taylor wrote and published very little of his own. Yet, many contemporaries copied his remarks and commented on his life and work. He was a model for Herman Melville’s Father Mapple in Moby Dick (see Appendix A) and had admirers among a surprisingly wide range of academics and church leaders in his time. Some of the most interesting – for a Methodist minister -were strong supporters among the Masons and Unitarians.

The focus of Armstrong’s book is not only a biography of Taylor – though the book does contain significant biographical material. Rather, in a certain way, Armstrong’s book might be understood as a biography of Taylor’s early biographers. In Part One of the book, Armstrong pens a brief (19 pages) overview of Taylor’s life and then includes an additional 20 pages of photos or images relevant to the story. Part Two – the bulk of the book, from pages 39 to 405 – contains short excerpts from accounts of Father Taylor by his contemporaries.

Before each excerpt, Armstrong lists the name of the writer and the date of publication and then, helpfully, provides a few lines of biography or context to the publication. Appendix B of the book is a list of sources Armstrong chose not to include among the excerpts in Part Two, stating, “These accounts round out the picture of Father Taylor, without altering it in any significant way.” (408)

Some of the more well-known commentators included by Armstrong are Ralph Waldo Emerson, Horace Mann and Walt Whitman. But, there are more than a hundred other commentators, often with insight that helps better understand Taylor, but also the 19th century religious and social context.

From an account of worship at the Seamen’s Bethel printed in the Northampton Courier on December 15, 1836, we read: “Rev Mr Taylor preaches in the Bethel Chapel to the Seamen in Boston. We heard his plain but pungent and forcible exhortations the other Sabbath afternoon. He was once a seamen himself and he knows how to reach their feelings and touch their hearts. It was no uncommon thing to see the tears rolling down the weather beaten cheeks of these old ‘sea dogs,’ a class of men ‘unused to tears.’ The truth is, the sailor is very susceptible of all kind and generous influences.” (116)

The Unitarian minister Robert C. Waterston shared his memories Taylor’s preaching: “As I entered the diminutive church, I found that every corner was packed, yet still the crowd came flocking in…In his earnest pleadings, his sympathetic voice trembled, and tears moistened his cheeks. His discourse was full of beauty and power. The most striking originality was united to an eloquence unsurpassed.” (309)

These examples give a taste of the many perspectives on Taylor’s life assembled by Armstrong. The book complements well other recent Taylor biographies including that of Wendy Knickerbocker (The Bard of Bethel, 2014).

It is fascinating reading for those wishing to understand maritime ministry in the 19th century, but also those interested in the history of ecumenism and homiletics. Modern preachers might learn a thing or two about rhetoric and story-telling from this sailor preacher.

Armstrong’s book is available at Amazon.com